Washington (CNN) The Transportation Security Administration is considering eliminating passenger screening at more than 150 small and medium-sized airports across the US, according to senior agency officials and internal documents obtained by CNN.

And to Deanna Venable, who posted on Facebook: “This father will regret his actions for the rest of his life.”

Regret? A piece of cow dung like that most likely couldn’t care less. That asshole doesn’t deserve anyone’s pity. He deserves a JAIL SENTENCE!

Apparently, fascism is apparently alive and well in the U.S. Makes one wonder what the hell we fought World War II for.

Just read part of the court transcript that was published in press reports:

14-YEAR OLD BOY: “I do apologize if I didn’t understand the rules. But I do not apologize for not talking to [the boy’s father] because I have a reason for that and that’s because he’s violent and I saw him hit my mom and I’m not going to talk to him.”

OAKLAND COUNTY CIRCUIT COURT JUDGE LISA GORCYCA: “[called the boy] a defiant, contemptuous young man” and then asked him if there was anything he’d like to say about being sent to jail.

14-YEAR OLD BOY: “But he was the one that [did] something wrong. I thought there [were] rules .. for not hitting someone.”

JUDGE LISA GORCYCA: “You’re supposed to have a high IQ, which I’m doubting right now because of the way you act. You’re very defiant. You have no manners. … You need to do a research program on Charlie Manson and the cult that he has … You have bought [it upon] yourself… going to the bathroom in public, and maybe summer school.”

JUDGE LISA GORCYCA: “You are so mentally messed up right now and it’s not because of your father. And one day you are going to realize what’s going on in this case and you’re going to apologize to your dad … Dad, if you ever think that he has changed and he’s no longer like Charlie Manson’s cult, then you let us know and we can (review the case).”

Judge Gorcyca then ordered the boy taken into custody and issued orders barring the mother or anyone from her side of the family from visiting him. She also refused to allow the mom to say goodbye to her son or to try to encourage him to speak with his father.

Later that afternoon, the judge bullied the 9-year old girl.

JUDGE LISA GORCYCA: “I know you’re kind of religious. God gave you a brain. He expects you to use it. You are not your big, defiant brother who’s living in jail. Do you want to live in jail? You want to have your birthdays in [jail]? Do you like going to the bathroom in front of people? Is your bed soft and comfortable at home? I’ll tell you this, if you two [meaning the girl and her 10-year old brother] don’t have a nice lunch with your dad and make this up to your dad, you’re going to come back here [after lunch] and I’m going to have the deputies take you to [jail].”

The 10-year old boy was asked about eating at the courthouse cafeteria.

Judge Gorcyca then told him he would not be allowed any contact with his brother and that they would be sent to separate detention facilities.

She then turned to the 9-year old girl and when the girl said she didn’t want to eat lunch with her father, she was taken into custody as well, ordering that the three siblings “be kept away from each other as much as possible” according to a hand-written order from the court.

This all happened on June 24, 2015, the media finally getting over their infatuation with the Confederate flag to report on something important. The three children have been incarcerated for over two weeks now.

Bloomfield Hills attorney Lisa Stern has since filed a Writ of Habeas Corpus on behalf of the children’s mother, the previous attorney having withdrawn from the case for not getting paid some $15,000 in fees. The motion by Stern seeks to have the children brought back before Judge Gorcyca on July 15 in order to lift the contempt ruling or show why “they are being deprived of their liberty.”

When I read about it, it made me think of Roland Freisler.

Just want to say a big ”thank you” to all of those men and women who keep our nation safe. Thank you for your sacrifices, thank you for the hardships you endure.

There’s a story I once read that I’d like to share. Credit for it goes to former Gov. Mike Huckabee of Arkansas, who related the incident in a speech he gave in 2007. Some of you may have already heard about it or seen it on the net, but it’s worth repeating and sharing to those who haven’t.

I have a friend who’s a schoolteacher at the Robinson High School in Little Rock, Arkansas. Her name is Martha Cothren. She’s a social studies teacher and a coach on the side.

Back in September of 2005, on the first day of school, Martha Cothren did something that I’ll never forget.

Martha, on the first day of school, with permission of the school superintendent, the principal and the building supervisor, took all of the desks out of the classroom.

The kids came into first period, they walked in, there were no desks. They obviously looked around and said, ”Ms. Cothren, where’s our desk?”

And she said, ”You can’t have a desk until you tell me how you earn them.”

And told them, ”No, it’s not even your behavior.”

And so they came and went in the first period, still no desks in the classroom. Second period same thing. Third period.

By early afternoon television news crews had gathered in Ms. Cothren’s class to find out about this crazy teacher who had taken all the desks out of the classroom.

The last period of the day, Martha Cothren gathered her class. They were at this time sitting on the floor around the sides of the room. And she says, ”Throughout the day no one has really understood how you earn the desks that sit in this classroom ordinarily.” She said, ”Now I’m going to tell you.”

Martha Cothren went over to the door of her classroom and opened it, and as she did 27 U.S. veterans, wearing their uniforms, walked into that classroom, each one carrying a school desk.

And they placed those school desks in rows, and then they stood along the wall. And by the time they had finished placing those desks, those kids for the first time I think perhaps in their lives understood how they earned those desks.

Martha said, ”You don’t have to earn those desks. These guys did it for you. They put them out there for you, but it’s up to you to sit here responsibly to learn, to be good students and good citizens, because they paid a price for you to have that desk, and don’t ever forget it.”

My friends, I think sometimes we forget that the freedoms that we have are freedoms not because of celebrities. The freedoms are because of ordinary people who did extraordinary things, who loved this country more than life itself, and who not only earned a school desk for a kid at the Robinson High School in Little Rock, but who earned a seat for you and me to enjoy this great land we call home, this wonderful nation that we better love enough to protect and preserve with the kind of conservative, solid values and principles that made us a great nation.

Take it from me: it’s awfully difficult to present any future semblance of authority after two boys you regularly babysit catch you fully nude on the toilet in the middle of a pee.

Oh, don’t I know this feeling!

Once my stepdad starting spanking me on my bare bottom when I was a teenager in front of family and guests, privacy was no longer something I was entitled to. That meant if my younger brother was instructed to see if I was ready to go somewhere – whoosh! The door would open without warning. Sometimes right along with his friends or our younger male cousins.

And too often my swearing and slamming the door in his face would merely lead to me being fully undressed as soon as I got downstairs for a humiliating spanking over my stepdad’s lap. 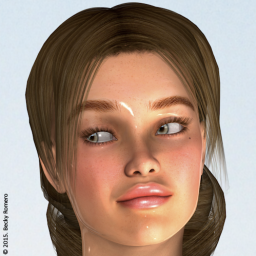 Midwest native Becky Romero finally coped with the many years of embarrassment, humiliation and shame by letting it all out into the open and talking about it. And she's no longer in denial that she often DID deserve, even well into her late twenties, many bare-bottom disciplinary spankings - no matter who was present and no matter the total exposure and shame she felt. Becky, now 32, is a college grad, single and lives with roommates. She is an interior decorator.